The Challah bread that we traditionally bake for Shabbath can totally make for any other day’s bread, and in my humble opinion it is especially nice for a weekend brunch or simple breakfast. The texture of this bread is a lot like a brioche. It contains less butter and sugar though, and for that matter it can easily be eaten along with both savory or sweet food items. 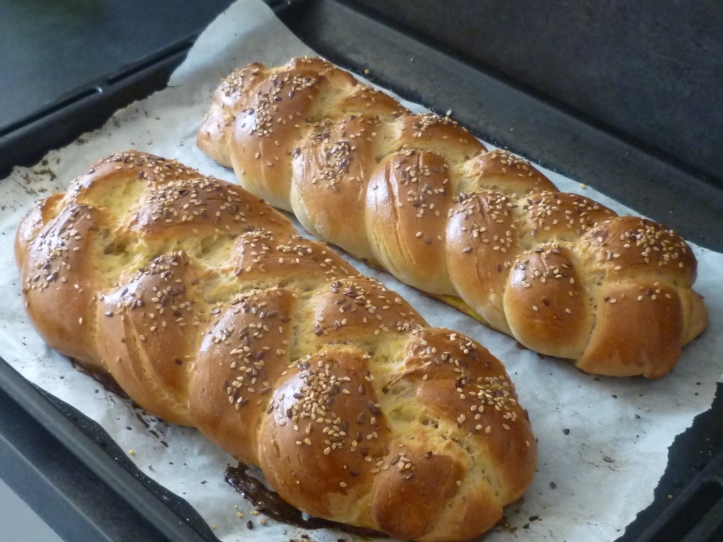 For Friday night’s shabbath dinner, at home we like our challah with a nice hummus, egg salad, tchoutchouka (North-African bell peppers cooked salad), Israeli salad, or any other small entree. And then we remember that the main course is coming, and we’re stuffed already – because this bread is so good, and it is almost impossible to stop munching on it at all. lol. Usually, when Saturday comes, we enjoy eating challah for breakfast two ways. Either with a slice of chicken or turkey breast and butter (or cheese), or with butter and jam. Now when Sunday comes, and only in the case that we still got some challah leftovers (which rarely is the case I must say), I like to use them to make croutons for a Caesar salad that I’d prepare for lunch or dinner. So, as you can see, challah bread can be very versatile! Making it requires quite some effort, I must admit, but it really pays back, and the reward is immediate (my husband’s smile, and both our stomachs happy).

What’s important in successfully making a challah relies on 3 aspects: the ingredients quantities, the kneading and the dough resting time. This recipe was first published in my cookbook in 2015, but since then I have improved the recipe a little, so this one here is the most up-to-date so far.

The resting of the dough allows the yeast to work on the other ingredients, and a good kneading makes the dough rise nicely and it does act too on the brioche effect. Those therefore are essential and cannot be seen as small steps. Cooking is a form of chemistry, and same as in science, every ingredient has a role, a purpose, a function, and because of the way it can interact with other ingredients, it comes with a sort of instructions manual and often with an oral shortlist of trials and errors from other people from the past. Respect the elder’s teaching, we always hear. Baking challah especially echoes to this saying. Indeed, because challah is a traditional Jewish bread, the recipe and techniques often are passed along from mother to daughter, or from MIL to DIL, or from grand-mother to grand-daughter in my case.

Traditionally, the challah is eggwashed and sprinkled over with sesame seeds before baking. Many times nowadays you’ll find them with poppy seeds, which makes for a nice alternative. This week, I’ve tried another option of my own, by combining sesame seeds with flax seeds, which worked out nicely. It does not make a huge difference, but I liked it and will do it again in the future. Indeed, I will have plenty of chances to do so in my life. I have the luck to make challah bread every Friday afternoon, as Shabbath is weekly Jewish holiday. Shabbath Shalom!

Created and Written by Sophie Rebibo-Halimi, © 2017 All Rights Reserved. 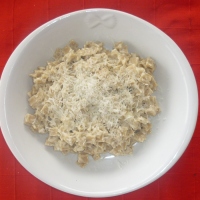